As seen on TV, the crab callers attract 30-35% more king crab. Pots with The Callers had larger, cleaner and less female than pots without The Callers, therefore reducing bycatch.

Feeding sounds of their own species, as well as an imitation of these sounds emitted by a transducer, increased movements of the king crab (Paralithodes camtschaticus). Some king crabs directly approached the sound source. Other sounds, including feeding sounds of different crab species, did not provoke discernable king crab reactions.

Numerous aquarium experiments on the king crab’s reactions to emission of various natural king crab feeding sounds and their imitations have allowed determination of signal parameters for attracting king crab. Precise duplication of signals resulted in the development of an acoustic crab lure (ACL). Fishing experiments proved that the ACL attracts king crab.

The king crab is the most valuable fishery resource in the Okhotsk Sea. They are caught either in small conical traps with a base diameter of 1.3- 1.5 m and a height 0.8-1.0 m or in large square pots measuring ca. 2.8 m × 2.8 m × 1.0 m. These traps are passive fishing gear and require bait to attract crab to them. At present, various fishes are used for bait but these lose their attractiveness with time and work efficiently only during the first 18 hours. This provides quite good catches when crab concentration is high. When concentration is low, a supplementary stimulus might re sult in higher catches. The most efficient stimuli, such as smell, visibility or sound, would be capable of reception over relatively long distances. Sound propagates quickly through water over long distances and is easily generated. Acoustical signals are hence practical for aquatic organism behavior management. Observations of Black Sea crabs showed that feed- 248Tolstoganova — Acoustical Behavior in King Crabing crabs produced sound as a series of pulses, and some crabs movedtoward the feeding crab and sometimes approached (Protasov andRomanenko 1962).

In this study, the properties of king crab feeding noises and the be-havioral response of king crabs to both natural and synthesized soundswere investigated. Our objective was to create an acoustic crab lure (ACL)which could increase a trap’s efficiency in catching large males and alsoserve conservation goals by avoiding capture of females and undersizedmales in traps.

King crab sounds were recorded in both wooden tanks and a commercialaquarium. Underwater acoustic signals were recorded by a piezoceramichydrophone (spherule with diameter 50 mm) and a tape recorder (Report-L 4000, Uher) or video-recorder (NV-S7E, Panasonic). The sensitivity ofhydrophone with tape recorder or video-recorder allowed instruments toregister signals in frequency range from 0.1 kHz to 20 kHz with dynamicrange 56 or 90 dB, when the signal sound pressure in the point of hydro-phone reception was higher than 0.5 or 0.2 Pa, respectively.

Acoustic signals were emitted in the aquarium by a transducer created at VNIRO using a tape recorder (Report-L 4000, Uher) audio amplifierwith max output level 10 V, and special electrical generators created in Crabs in Cold Water Regions: Biology, Management, and Economics249VNIRO. Also, octave, band-pass filters were used. The transducer sensitiv-ity is 0.3 Pa per volt at 1 meter, in the frequency range from 1 to 20 kHz.

Positive reactions of king crabs were evaluated by a system of 0 to 1marks (0 mark = no reaction, 0.5 mark = moving toward a transducer, 1mark = approach a transducer). All reaction marks of each crab reaction were summarized during the emitting of acoustic signals.

Three one-factor experiments consisting of 75, 15, and 10 replications were carried out to study king crab behavior in response to recorded natural feeding sounds of king crab, hairy crab (Erimacrus isenbeckii), and Black Sea shore crab (Carcinus maenas). Then five multi-factorial experiments were done: four were carried out by means of Latin square designs(Fisher 1935), and the final one by means of the Box-Wilson method.

The fourth experiment with a rectangles plan of 4 x 8 was carried out to study king crab behavior in response to eight feeding king crab sounds(the factor “biosignal”), and to reveal biosignals attracting king crabs mostprecisely. The “intensive” factor had four gradations from 1.5 to 0.05 Vand from 0 to –30 dB. The third and fourth nonsearched factors were“time” and “date,” also with four gradations.

The fifth experiment with square plan of 6 x 6 in common with a magicsquare of 6 x 6 was carried out to study king crab behavior in response tosix feeding king crab sounds (third factor, “biosignal”) emitted using fiveband-pass filters, which were 1/3 octave with the center frequencies 0.5, 1,2, 4, 8 kHz, and band-pass filter with the range of 0.5-20 kHz. The firstfactor was “frequency” and the second factor was “intensive.” All threesearching factors had six gradations. Time drift was removed by means ofthe magic square by sum of six elements of tiers and columns.

Fishing experiments were carried out using a large acoustic crab lure (ACL-l) installed above a trap and a smaller ACL (ACL-s) installed within a large square pot measuring about 2.8 m x 2.8 m x 1.0 m. The small acoustic crablure (ACL-s) produces high frequency acoustic signals (pressure 5-10 Pa at1.0 m) and has an effective attractive radius of 100 m. The ACL-l produceshigh frequency sound pressure (about 100 Pa at 1.0 m) and has an effective radius of about 1,000 m.

During the introductory period and trial exploitation of 70 ACL-l, sixharvesting vessels operated in one area of western Kamchatka, of whichthree were equipped with acoustic lures. The first three vessels (trial) andthe second three vessels (control) set 332, 349, 344, and 392, 403, 379trap series (respectively) in regions of the largest concentrations of crab.

Sounds produced by crabs during feeding represent a series of species specific, complicated pulses and have a wide-continuous frequency spectrum from 0.1 to 20 kHz. For example, feeding sounds of Black Sea shore crabs (Carcinus maenas) have pulses with frequency about 5 kHz with its envelope like an exponential pulse.

Feeding sounds of hairy crabs (Erimacrus isenbeckii) consist of pulses with a rectangular envelope and chaotic amplitude and frequency modulations.

In the aquariums, the presence of food usually increased king crab motor activity. Crabs made non-directed, chaotic movements that resembled“Brownian movement.” These random movements resulted in finding food only after 0.5 to 2.0 hours. This kind of behavior indicated that king crabs were using organs for the sense of smell or chemoreception which detected the presence of food particles in the aquarium, but not the direction toward the source of corresponding stimuli. From time to time different crabs approached the feeding crab and produced characteristic intensive sounds. These crabs approached directly, very often in a straight line.Analogous behavior was observed while feeding sounds and their imitation were emitted by the transducer and tape-recorder or special generators. 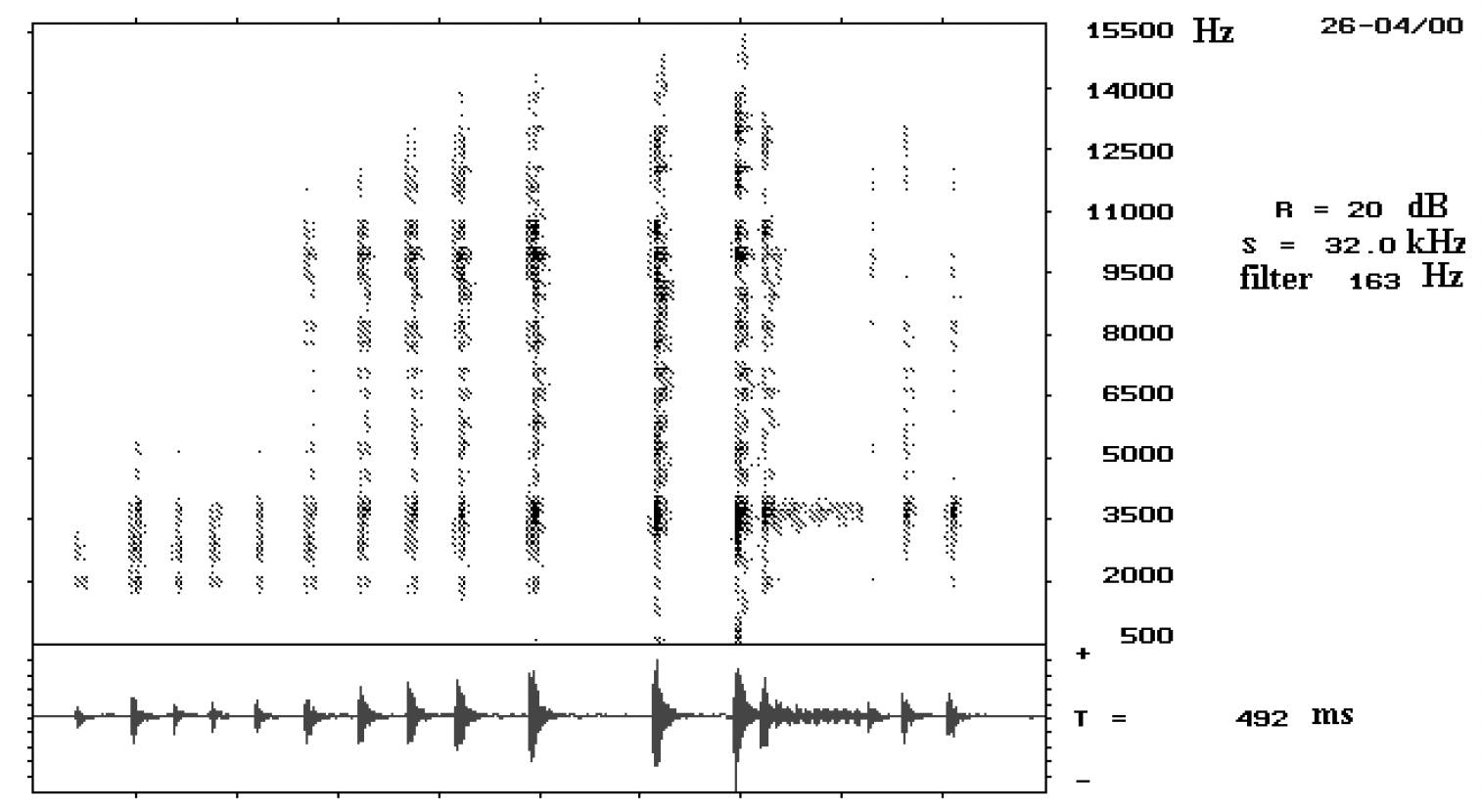 Figure 1. Sonogram and oscillogram of the king crab feeding signal. The duration of the signal consists of 16 pulses in 315 ms. 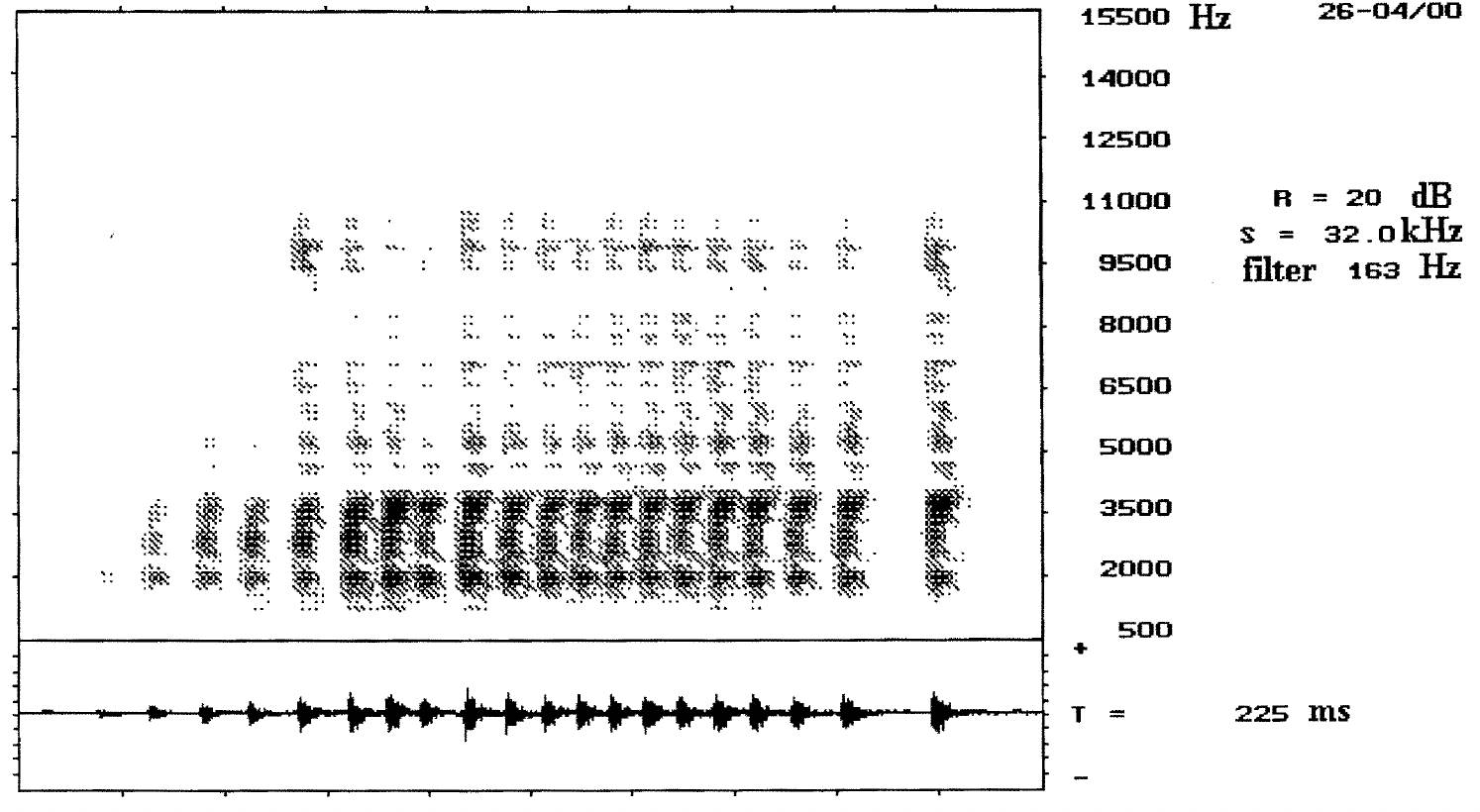 Figure 2. King crab signal produced when oxygen concentration in water de-creased. The duration of this signal consists of 20 pulses in 140 ms.

The results of three one-factor experiments showed that king crabs approached the transducer in 47 out of 75 experiences. However, Black Seashore crab and hairy crab feeding sounds did not provoke discernable king crab reactions.

The fourth experiment, in which king crab natural feeding sounds were emitted by the transducer, revealed six feeding crab sounds to use in the next experiment. For the fifth experiment, it was necessary to exclude two feeding king crab sounds, damaged while emitting, and change the experiment plan from 6 x 6 to 4 x 6. The experiment results are shown inTable 1. These results proved that only gradations of the factor “frequency” were significant, and the signal with the second gradation frequency at-tracts king crab most precisely (Tolstoganova 1983).

The sixth and seventh experiments carried out to study king crab behavior in response to various imitations of feeding king crab defined structure and parameters of impulse signal imitating feeding king crab sound. The study of crab reaction to acoustical signals created using special generators has shown that crabs may react to some of these signals moreo ften than they do to their own feeding sounds (in the marking system from 0 to 12 marks, during 5 minutes) (Tolstoganova 1983). Using the results of these experiments, the acoustic crab lure (ACL) has been made.

Observations on king crab behavior have shown that king crabs possess not only the ability to hear sounds, but also to determine the direction of the sound source. Research on king crab reactions to natural and synthetic acoustical signals demonstrated that crabs react to synthetic signals more often and more clearly than to their own feeding sounds both in aquarium and open-sea conditions, likely because during recording aquarium reverberation and ambient noise are present.

Synthetic and natural sounds were discovered by trial and error, while in search of acoustical signals that appeared to cause large male king crab to move toward the sound source. Some of these sounds were not attractive to small males and females. 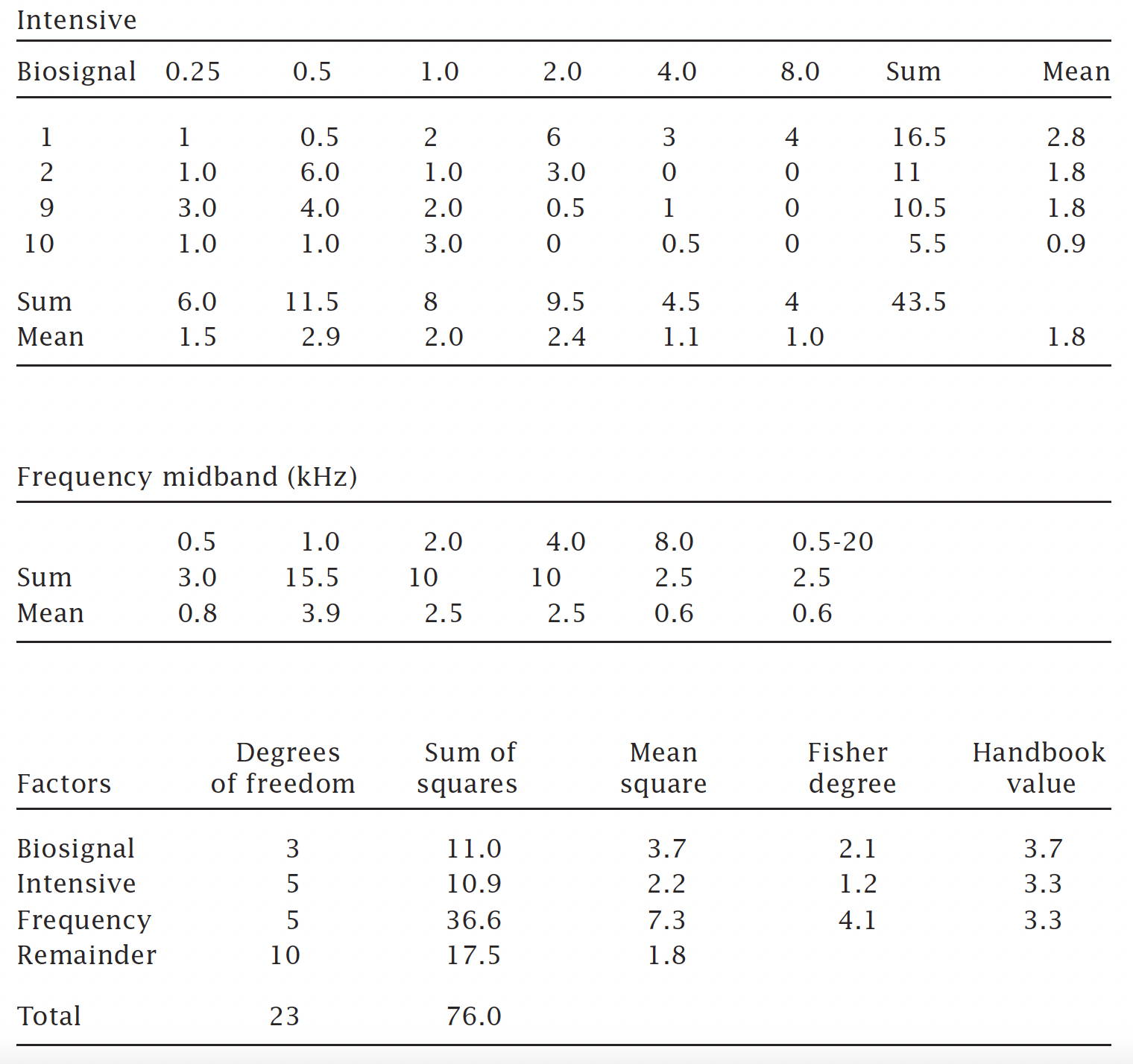 Numerous single and multiple factor aquarium experiments on king crab searching reaction to king crab feeding sounds, as well as synthetic signals, allowed determination of the structure and optimal parameters of signals that attracted commercial-size male king crab. These experiments resulted in construction of an acoustical crab lure ACL. Now we are legalizing a patent based on these optimal parameters.

Discomfort sounds of king crabs were recorded three times in 50 minutes when the fresh water and air were shut off. Perhaps the crabs produced discomfort sounds because the oxygen content decreased.

Unlike crab feeding sounds that were systematically studied over several years, the sounds of crab discomfort were recorded only by chance. Hair crab (Erimacrus isenbeckii) emitted sounds of discomfort when placed in an aquarium that was contaminated with oil.

Fishes also produce sounds of discomfort. The low acoustic activity of beluga sturgeon (Huso huso) juveniles increased while they were feed-ing on toxic or semi toxic food. During this time juveniles produced a series of pulses and short whistles. The number of acoustic signals was correlated with the condition of the toxic food and the amount of toxic food consumed before. In addition, juveniles fed with toxic and semi toxic food produced similar acoustic signals when the oxygen content decreased from 7.8 mg to 5.3 mg per L (Tolstoganova 2000).

Possibly, detailed studies of acoustic activity could be used to monitor the health of various aquatic organisms and hence remotely monitor and possibly even control certain environmental conditions.

I am very grateful for help and assistance from the crew and all the staff of fishing vessels on which my studies were conducted. Especially I would like to thank the captain of factory vessel Vastly Poutintcev, Mr. V.N. Gridnev, and Mr. A.F Nikolaytchouk for help, kind advice, and cooperation during sea experiments. 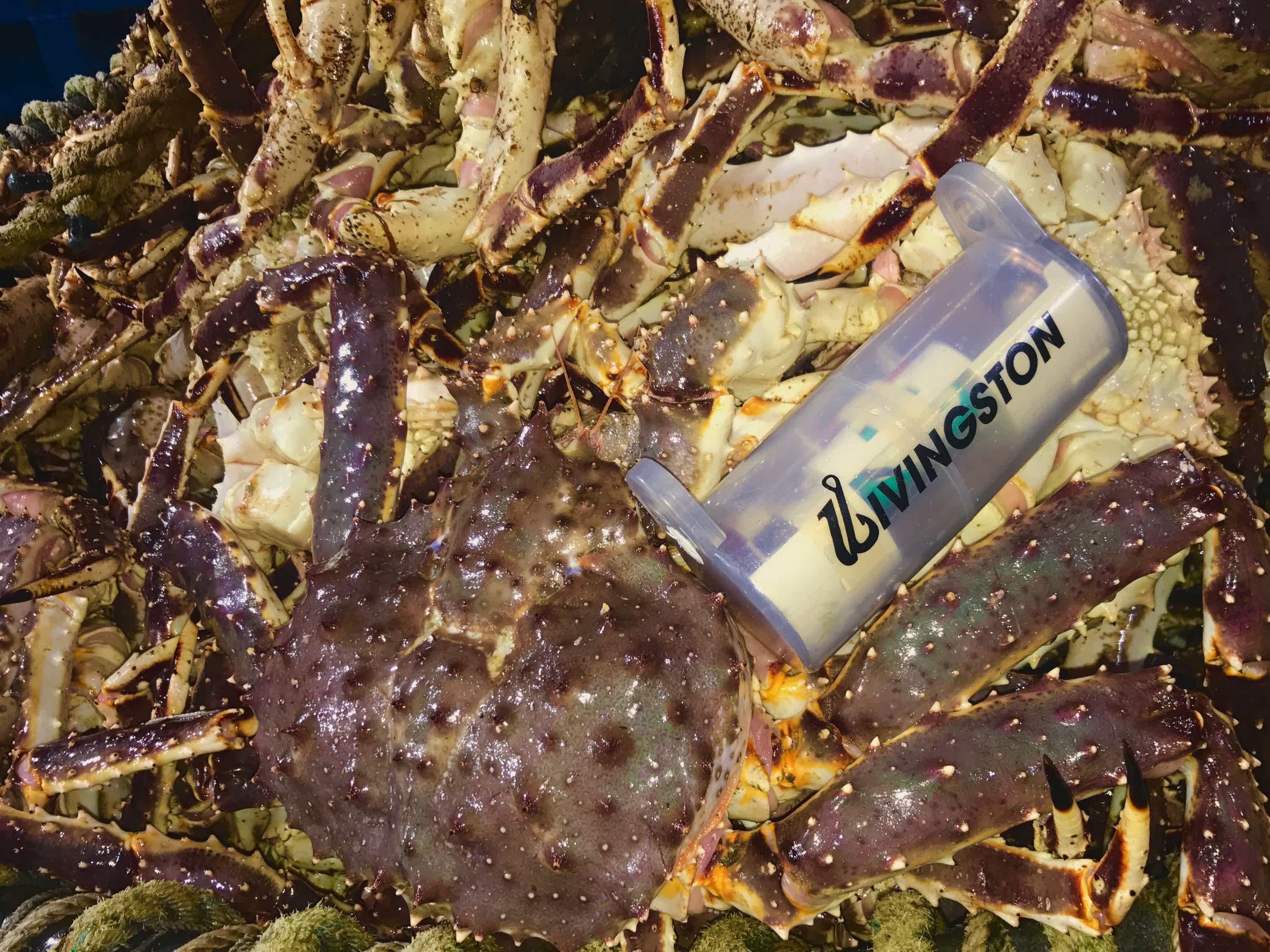 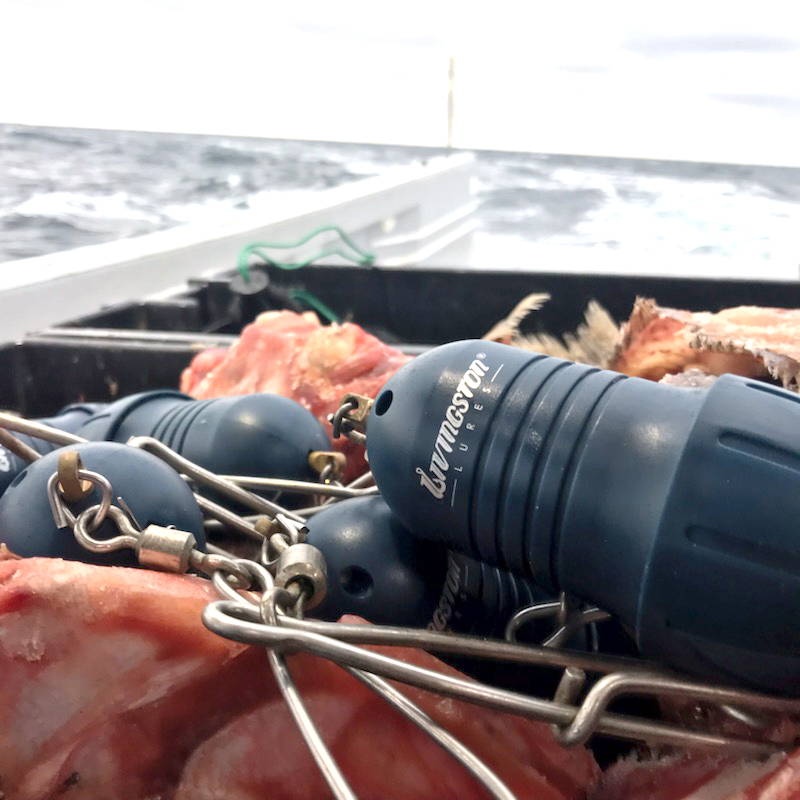 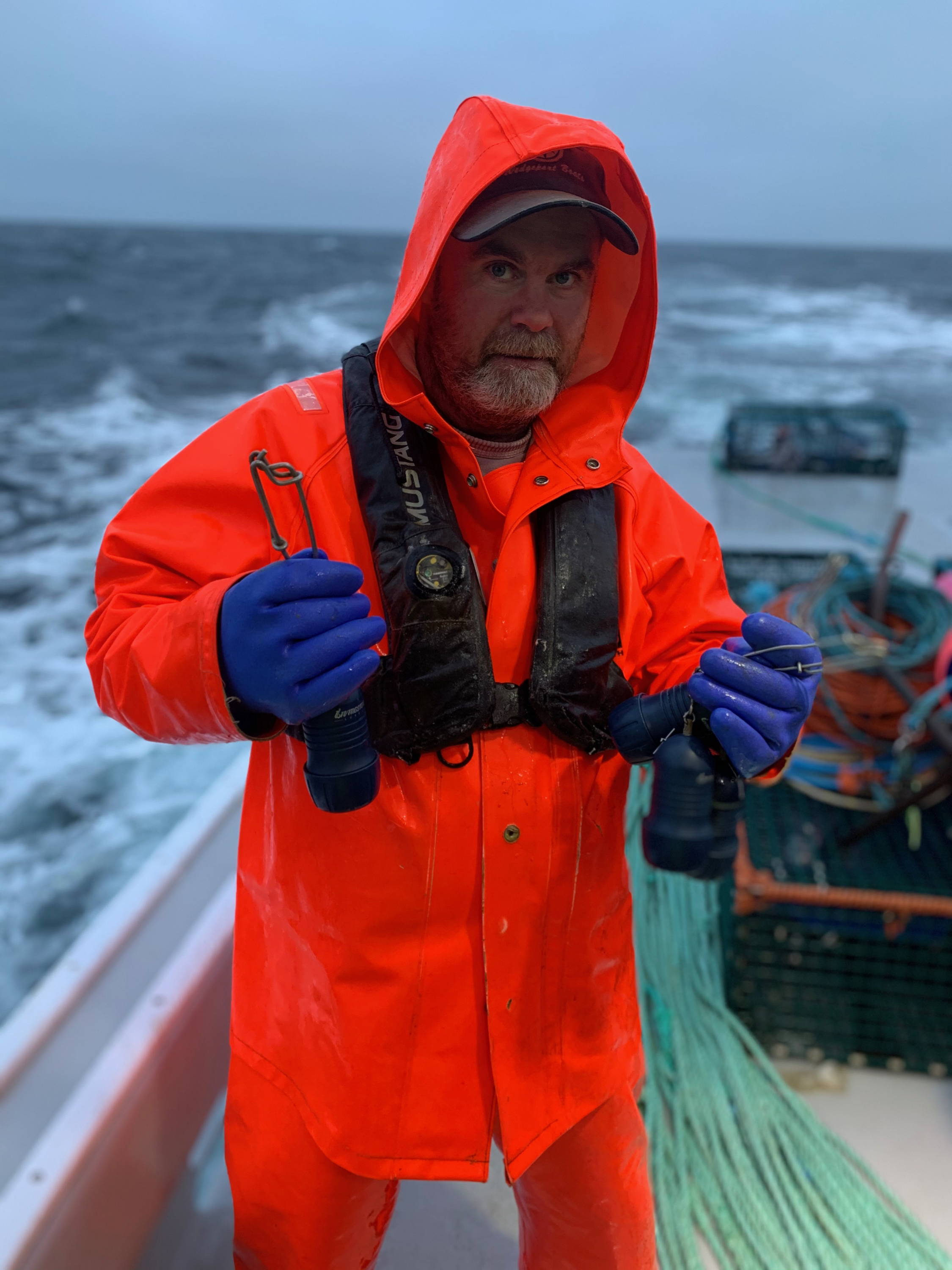 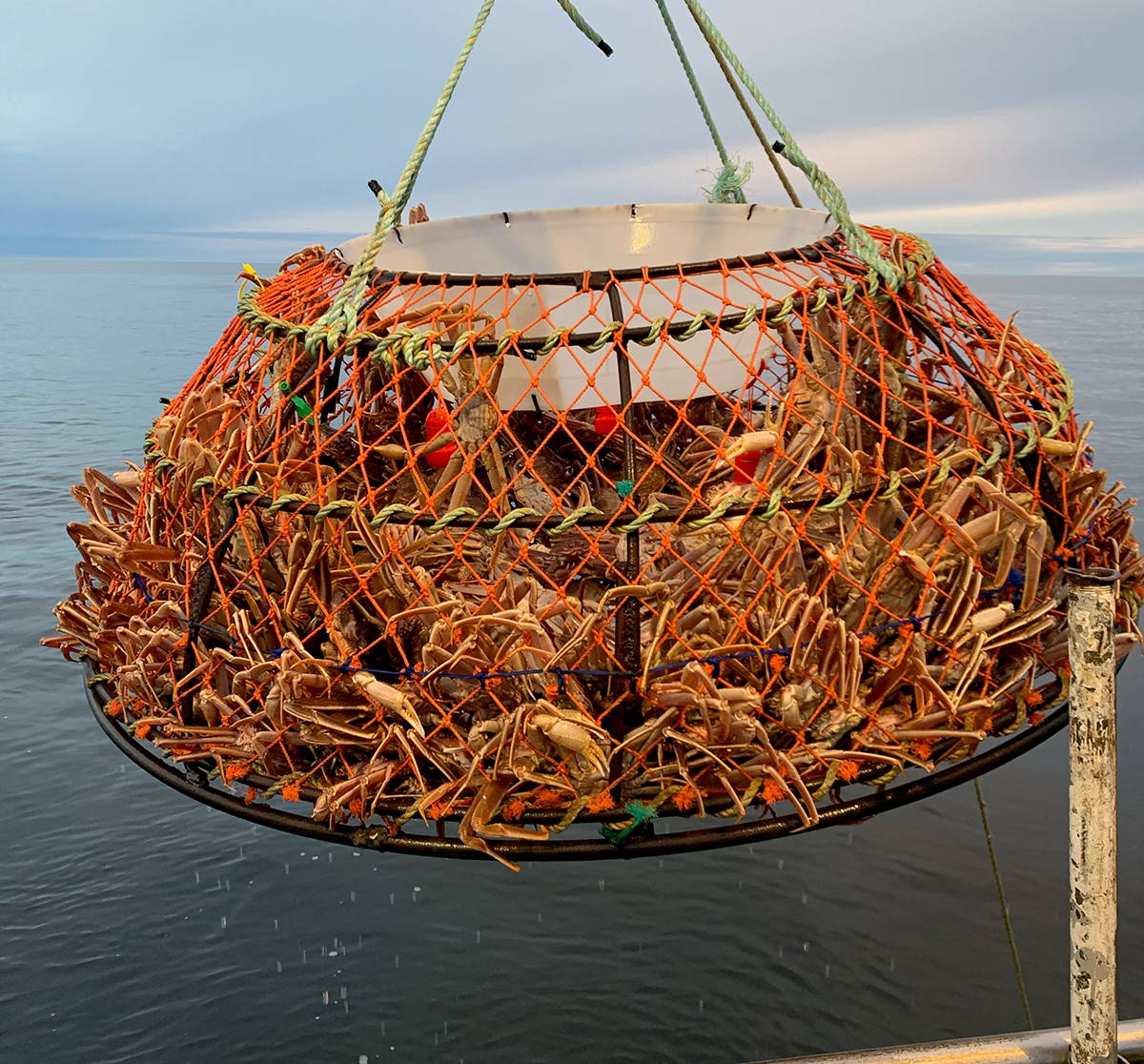 Product has been added to your wishlist.
You can view your wishlist by creating or login account.
Please create account through ##customer_email## email
Login Register
×
Welcome Newcomer